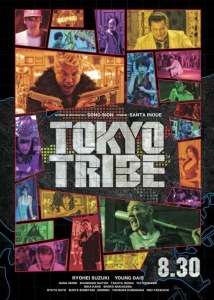 Utterly bonkers Japanese hip-hop musical about warring gangs in a dystopic future Tokyo. Sono demonstrates he is one of the most fascinating filmmakers working in Japan today. Based on Manga series.

Powerful allegory about an abandoned dog who starts a revolution. At once touching and terrifying, White God contains some of the most intense and harrowing sequences ever filmed. Warning, while this is a film for all animal lovers, some parts of the film viewers may find upsetting. 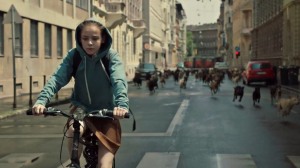 Just for Halloween! A special screening of the cult classic, The Rocky Horror Picture Show!! Dress up, shout out the lines, throw toast & confetti, and get ready to do the Time Warp (again!). Note: film starts at 20:00 and you’ll still be able to make the parties around town. 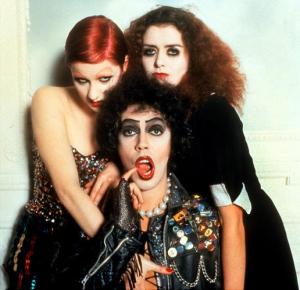 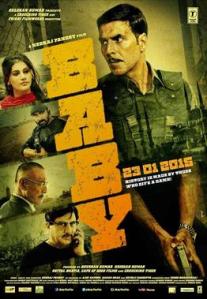 An action-packed Bollywood extravaganza about an elite counter-terrorism unit trying to prevent a massive attack in New Dehli. Baby is the highest rated Bollywood film on IMDB (as of time of writing), with a score of 8.2! 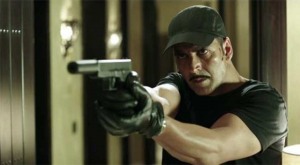 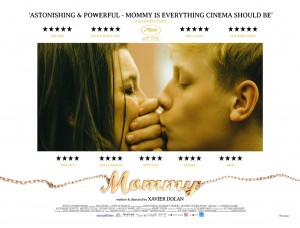 An intense drama about a single mother trying to raise her delinquent son, filmed in a style one can only describe as “Canadian Social Realism”. When screened at the 2014 Cannes film festival, Mommy was given a five minute standing ovation, before going on to sweep the 2014 Genie Awards (Canadian Oscars). The performances are breath-taking; some of the finest film acting you will ever see.

Finishing off 2015, Splendid Cinema is proud to present possibly our favourite film in the season. Wild Tales are six, unrelated short stories which manage to be funny, romantic, tragic and utterly unpredictable. Nominated for the Oscar (Best Film Not in the English Language), Palme D’or at Cannes and for Spain’s Goya awards; swept Argentina’s version of the Oscars too. Not to be missed!

All films are Sunday evenings from 18:00 and at the Worcester Arts Workshop. Admission is £5.

Stay tuned everyone, Splendid Cinema is set to return to the Worcester Arts Workshop this coming October.

Films will be announced shortly.

So what has happened to Splendid Cinema? Well, during the recent changes at the Worcester Arts Workshop, Splendid Cinema was put into limbo. In particular, we needed to find new equipment in order to show films.

The BFI & Saville AV are sponsoring a Community Cinema competition. Prize includes “a 4000 Lumen Projector, Projection Screen, Full HD Smart Blu-ray player, Amplifier, Speakers with stands and a Magic Movie Mobile to keep everything safe in!” Winning this competition would mean Worcester has a permanent independent cinema at the Worcester Arts Workshop! Details of the competition can be found here:

We’ll post more details and information as we get it!

And thank you for the support!

Please note: Past technical problems at the WAW have now been mostly sorted.  And Splendid Cinema can confirm that this screening is going ahead on 10 November. 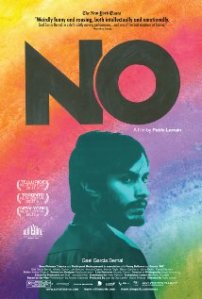 Chilean director Pablo Larraín returns with his latest film, the highly acclaimed No (2012), to Splendid Cinema on 10 November.

Set in the late 1980s, the film examines the important moment in Chilean history after dictator Gen. Augusto Pinochet authorises a national plebiscite allowing people to vote whether they want him to continue his presidency for 8 more years, or not. Fifteen minutes of television airtime is given for those supporting Pinochet’s regime as well as those who oppose to it.

No is a story about a young advertising executive René Saavedra (played by Gael García Bernal in a career defining role), who is hired to run the ”No” campaign. By taking the job René is forced to confront his boss Lucho (Alberto Castro), who organises and directs the ”Yes” campaign. Being constantly criticised for his decision to work for the opposition, and experiencing threats against the safety of his family, René does not give up. No highlights possibly the most incredible advertising campaign in history; to keep a blood thirsty dictator or to embrace democracy.

No was nominated for the Oscar in the Best Foreign Language Film category. The uplifting and intelligent take on this significant moment in Chilean history, the fall of their totalitarian regime, is the absolute must see!

The screening starts at Worcester Arts Workshop on Sansome Street at 6.30pm with the box office  open from 6pm. Tickets are £5 in advance or on the door with Café Bliss open for a pre-show treat.

For more information on any of the independent cinema’s screenings, please contact Mikel Koven at splendidcinema@live.co.uk, or follow the blog splendidcinema.wordpress.com.

Set in the 1970s, the film’s central character, Gilderoy (Toby Jones), an English sound technician hired to work on a soundtrack for an Italian horror film, finds himself trapped in a claustrophobic sound studio. Immersed in the horrific sounds, Gilderoy spends his days stabbing and punching vegetables to get the desired effects. And gradually finds himself losing his grasp on reality.

Peter Strickland orchestrates a film which celebrates the pleasures of the Italian giallo film without resorting to the gruesome imagery which often characterizes the genre, and yet never sacrifices Gilderoy’s humanity.

Listed as one of the best films made in 2012 by the Sight and Sound annual critics’ poll, Barberian Sound Studio won several awards at the British Independent Film Awards, including the Best Achievement in Production, Best Technical Achievement, and Best Director, as well as earning actor Toby Jones a nomination for Best Actor at the Golden Globes.

Don’t  believe us? Here’s the trailer!

In addition, Worcester’s only independent cinema will also be screening A Child’s Toy a short film by Tom Lee Rutter, before the feature as part of the Splendid Cinema’s  initiative supporting local filmmakers.

The screening starts at Worcester Arts Workshop on Sansome Street at 6.30pm with the box office  open from 6pm. Tickets are £5 in advance or on the door with Café Bliss open for a pre-show treat.

For more information on any of the independent cinema’s screenings, please contact Mikel Koven at splendidcinema@live.co.uk, or follow the blog splendidcinema.wordpress.com

Tickets £5 on the door, or in advance from

Coming Next at Splendid Cinema, 3 March 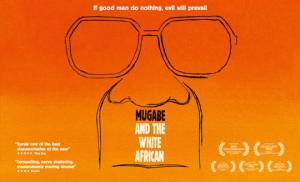 Powerful documentary about living under the Mugabe Regime Plays for One Night Only.

A powerful documentary depicting the encounter between the Zimbabwean president Robert Mugabe‘s land reforms’ impact on one white Zimbabwean family, Mugabe & the White African (2009), will be screened at Splendid Cinema on the 3rd of March. This will mark only the second ever screening of this film in Worcester – a film which was edited here in the city by local editor, Tim Lovell.

Mugabe and the White African offers an intimate portrait of the family of Mike Campbell, one of the few white farmers left since the land seizure programme introduced in 2000. Campbell’s farm is the home for his own family and 500 farm workers and their relatives. The impact of these reforms would devastate the local economy. The documentary depicts not only the Campbell family’s defiance against the Mugabe regime, but also their courage by charging the government with racism and violations of their basic human rights.

Filmmakers Lucy Bailey and Andrew Thompson’s tight focus on the Campbell family and the horrors they experience whilst trying to challenge the political injustice, makes a powerful statement, as well as adding complexity to what is normally reported regarding the region.

Nominated for a BAFTA award for Outstanding Debut by a British Writer, Director or Producer in 2010, the film has won several other awards including the British Independent Film Award in the category of the Best Documentary in 2009. Tim Lovell, the editor of the Mugabe and the White African, will be in attendance to do a Q&A after the film.

Here’s the trailer for the film:

In addition, Worcester’s only independent cinema will also be screening Shalom Kabul, a short film by Jack Jewers, before the feature as part of the Splendid Cinema’s initiative supporting local filmmakers.

The screening starts at Worcester Arts Workshop on Sansome Street at 6.30pm with the box office open from 6pm. Tickets are £5 in advance or on the door with Café Bliss open for a pre-show treat.  For more information on any of the independent cinema’s screenings, please contact Mikel Koven at splendidcinema@live.co.uk, or follow the blog splendidcinema.wordpress.com

Tickets £5 on the door, or in advance from

The Academy of Motion Picture Arts & Sciences (aka the folks who give out Oscars) have announced their short list of 9 Best Foreign Language Film nominees. Have a look….

Worcestershire Cinemas Through the Ages

Between January and the beginning of November, I – along with several volunteers – were part of a remarkable oral history project about cinema-going in Worcestershire.

The end-product of that project can now be seen here:

Splendid Cinema presents Rabies (Kalevet), the first ever Israeli horror feature film, on October 28th at 7:30pm at Worcester Arts Workshop. Perfect to finish off your Halloween weekend in the city!

Rabies tells the interlocking stories of a brother and sister, a group of friends, and a man and his dog, and what happens to them when they enter the forest populated by a maniac, a devious policeman and landmines .  Contrary to what you might first think, Rabies is not about a viral outbreak, frothing at the mouth or otherwise, Rabies instead is about the human capability for violence that lies dormant… until provoked.

Rabies succeeds in being both violent and shocking, whilst also being darkly comic at times and ripping the horror movie playbook to shreds with its fresh, meticulously crafted script.

Clever, easy to watch and a whole lot of fun, Rabies is the perfect thing to finish off your Halloween weekend!

Have a gander at the trailer!