This blog is closing

Hi all, first of all, do not worry, Splendid Cinema is still happening. I’m just finding the task of keeping so many blogs alive and updated overwhelming.

The schedule for Splendid Cinema will now be posted here: https://filmstudiesworcester.wordpress.com/splendid-cinema-schedule-of-forthcoming-films/

And this link will be continually updated, so the schedule you see here will always be the most accurate one.

Please follow the filmstudiesworceser.wordpress.com blog to be kept up-to-date.

Splendid Cinema goes for the spaghetti this Thursday. Spaghetti WESTERN, that is! 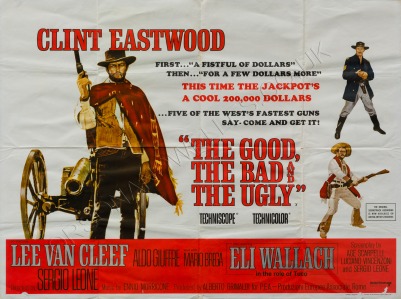 This Thursday, Splendid Cinema is super excited to present Sergio Leone’s masterpiece, The Good, the Bad and the Ugly as part of our “Cult Film Thursdays” series.And we’re presenting this classic in a restored HD print. It’s going to look gorgeous!

Starring Clint Eastwood, Lee Van Cleef and Eli Wallach, The Good, the Bad and the Ugly tells the tale of three treasure hunters searching for a lost chest of gold, set against the back drop of the American Civil War. Ennio Morricone’s epic soundtrack is reason enough to see this classic as it was meant to be seen, on the big screen! So dust off your poncho and trot yourself down to Worcester Arts Workshop, this Thursday, 17 November.

Doors open at 7:15 for a 7:30 start
Tickets are £5 on the door
Below is our Autumn 2016 schedule. Please come and watch some incredible, positively Splendid, cinema.

(links below take you to YouTube, and the film’s trailer)

22 September: Son of Saul (HU, László Nemes, 2015) 15 cert. 107 min. Winner of the 2015 Grand Prix award at the Cannes Film Festival and both the Golden Globe and Oscar for Best Foreign Language Film. During World War II, a Jewish worker (Géza Röhrig) at the Auschwitz concentration camp tries to find a rabbi to give a child a proper burial.

6 October: Anomalisa (US, Duke Johnson & Charlie Kaufman, 2015) 15 cert. 90 min. Both very funny and deeply touching, Anomalisa is widely regarded as an outright masterpiece of stop-motion animation. The film follows a lonely customer service expert (voiced by David Thewlis) who perceives everyone (Tom Noonan) as identical until he meets a unique woman (Jennifer Jason Leigh) in a Cincinnati hotel.

3 November: The Lobster (GR, IE, NL, UK, FR, Yorgos Lanthimos, 2015) 15 cert. 119 min. Strange, surreal, and yet, somehow, quite romantic. In a dystopian near future, single people, according to the laws of The City, are taken to The Hotel, where they are obliged to find a romantic partner in forty-five days or are transformed into beasts and sent off into the woods.

17 November: The Good, the Bad and the Ugly (IT, Sergio Leone, 1966) 18 cert. 180 min. Part of our “Cult Movie Thursdays” programme. Leone’s masterpiece on the big screen in HD! Clint Eastwood, Lee Van Cleef and Eli Wallach race to find buried treasure during the American Civil War. This is one of the greatest Spaghetti Westerns ever made!

8 December: Taxi Tehran (IR, Jafar Panahi, 2015) 12 cert. 89 min. Winner of the Golden Bear award at the Berlin Film Festival. In this quasi-documentary, Jafar Panahi is banned from making movies by the Iranian government, so he poses as a taxi driver and makes a movie about social challenges in Iran.

Check out our line-up for Spring! (with trailers!)

Set among the mean streets of the Parisian banlieues, a young black woman tries to survive inside and outside of the street gangs and a life of crime in this highly much-admired film.

Starring Michael Fassbender & Marion Cotillard. Macbeth, the Thane of Glamis, receives a prophecy from a trio of witches that one day he will become King of Scotland. Consumed by ambition and spurred to action by his wife, Macbeth murders his king and takes the throne for himself. 4 STARS “Stylish and Inspired” The Guardian

A disfigured concentration-camp survivor (Nina Hoss), unrecognizable after facial reconstruction surgery, searches ravaged postwar Berlin for the husband (Ronald Zehrfeld) who might have betrayed her to the Nazis.

In the Ottoman province of Hijaz during World War I, a young Bedouin boy experiences a greatly hastened coming-of-age as he embarks on a perilous desert journey to guide a British officer to his secret destination.

Voted the best film of 2015 by the BFI’s Sight & Sound magazine. An assassin accepts a dangerous mission to kill a political leader in seventh-century China.

A visceral cinematic experience like no other, The Tribe is a story that needs no translation. Deaf mute Sergey becomes embroiled in the illegal activities of the fearsome gang that rule the specialized boarding school he attends. His burgeoning love for a fellow student however, soon leads him on a collision course with the gang’s hierarchy. In Ukrainian Sign Language (USL), without subtitles. 126 min.

“The Tribe feels like something unmistakably, radically new” Variety

Worcester Arts Workshop asked me to start contributing to their blog on behalf of Splendid Cinema. Of course!, I said. What a great idea. To start things off, and in advance of this coming Sunday (24 January), I thought I’d answer the basic questions WAW asked me to cover.

The selection process for Splendid Cinema is always a difficult one.  Over the course of the year, I keep up-to-date with world cinema by reading magazines like Sight & Sound and keeping abreast of what is happening at film festivals around the world. I listen to the buzz regarding films which might be appropriate for the Splendid audience. It is always something of a tightrope walk in actually choosing the films: one the one hand, I want to bring the best of world cinema to Worcester, films which would never play at the Odeon or the Vue because they’re not in English or seen to be “of limited interest”. But I also need to choose films which people have heard about, or which have a built in audience, like our upcoming film The Tribe which is particularly relevant to our hearing-impaired communities.

Why are you so passionate about films?

I know it is a cliché, but film is my life. It always has been, since I was a very young child. I’ve always been movie-mad. Cinema is the great unifier of people; when we sit around the virtual campfire and listen to each other’s stories, we share a communal experience in the global village. Sometimes the stories are familiar, and sometimes they are completely unique. But watching a film says “I want to hear your story”, and I truly believe we become better people for it.

Why people should come to Splendid Cinema?

Splendid Cinema is the only independent cinema space in Worcester, the only place in the Faithful City where international and independent films are screened. Films which are different from the mainstream cinema of Hollywood. My favourite audiences for Splendid Cinema are those who come who know nothing about the film, sometimes they don’t even remember what the film is called, they just trust what we screen will offer them an experience they’ll not get anywhere else in Worcester.  Much of international cinema is now screened inside the home, through DVDs or streaming platforms like Netflix, which is great. But there is nothing equal to watching a film in a communal space, in the dark, where 30 strangers share an experience.  That’s what Splendid Cinema is all about. 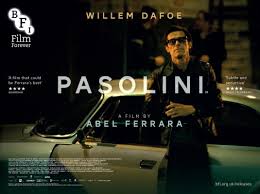 Next up is Pasolini (Abel Ferrara, 2014): I chose this film for several reasons, which can be summarized in three words: Pasolini, Ferrara & Dafoe. First of all, Pier Paolo Pasolini is one of my favourite filmmakers (I even did my undergraduate independent study on him, back in the day), so a film about his final 24 hours in the middle of the controversy surrounding his latest film, Salo or 120 Days of Sodom (1975) is motivating in its own right. Secondly, American filmmaker, Abel Ferrara, is tremendous independent auteurs, and whose films like The Driller Killer (1979), The Addiction (1995), Ms. 45 (1982), Bad Lieutenant (1992) and The King of New York (1990)are recognized classics of American independent and exploitation cinema since the late 1970s; so his latest film was always going to attract my attention.  Thirdly, Willem Dafoe stars at Pasolini; one of my favourite actors as one of my favourite directors.  Ferrara treats the sordid details of Pasolini’s death with sensitivity and respect, and Dafoe’s performance as the famous director is astonishing.  I’m really proud to be presenting Pasolini at Splendid Cinema on 24 January. 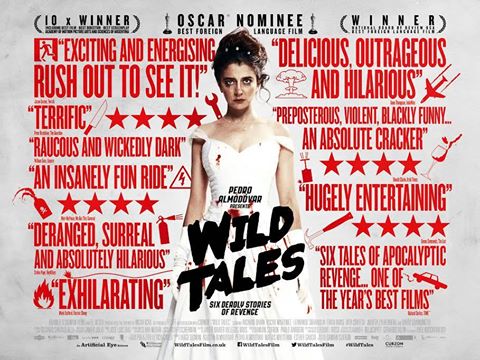 Finishing off 2015, Splendid Cinema is proud to present possibly our favourite film in the season. Wild Tales are six, unrelated short stories which manage to be funny, romantic, tragic and utterly unpredictable. Nominated for the Oscar (Best Film Not in the English Language), Palme D’or at Cannes and for Spain’s Goya awards; swept Argentina’s version of the Oscars too. Not to be missed!